Kevin Kelly's 1000 True Fans: a Method to Success for Creatives?

This is about an older article from The Technium, but it's so good that I just have to talk about just how great it is. Kevin Kelly says people who make things should stop trying so hard to get a few wealthy patrons and also not count on trying to sell a gazillion cheap items. He says what creative people like us should be doing is looking for 1000 true fans. These 1000 true fans are people who are willing to spend a day's wage, once per year, to support your endeavors. 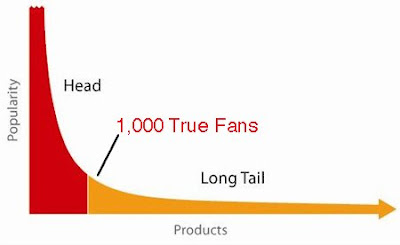 Graphic © Kevin Kelly
Kelly goes on to say that true fans are people who:

...will purchase anything and everything you produce. They will drive 200 miles to see you sing. They will buy the super deluxe re-issued hi-res box set of your stuff even though they have the low-res version. They have a Google Alert set for your name. They bookmark the eBay page where your out-of-print editions show up. They come to your openings. They have you sign their copies. They buy the t-shirt, and the mug, and the hat. They can't wait till you issue your next work. They are true fans.

I bolded one of his sentences above for a reason. You see, at first some might say that his theory is a pipe dream, and that it's actually quite difficult to get 1000 true fans. In fact, some people like John Scalzi have really pointed out some major obstacles and roadblocks to attaining this goal, and they have a pretty good argument, I have to admit.

However, as I mentioned, I bolded a line above about people watching items in eBay. This is because a young woman is doing exactly what Kevin Kelly talks about, and from what I can tell, she started doing it before Kelly even wrote his article.

Abbey Ryan paints small oil paintings once a day and puts them up on eBay where they are selling for $80 to $250 each. I don't know exactly how successful she is at making a living at doing these paintings, but she is actively engaged in what we're talking about here: getting true fans and she's generating a buzz, so it's definitely working for her in that respect (not to mention that her paintings are actually pretty cool as well). In fact, some of you are going to go to Ryan's site right now and be amazed at what she's doing. You're going to bookmark her page, blog about her, and maybe even jump on eBay... just like Kelly said. This is how it happens, folks.

Back to Kelly's article....

Kelly knows he's making it sound easy. He writes that it does take time and that it is hard. But isn't this exactly what it's all about if you make a living being creative? You work hard to appeal to your true fans. One cannot just take a photo or make a painting, frame it, and expect people to want to buy it. There has to be a reason, an appeal, an affinity, and all creatives have the tools available in this day and age to attain a steadily growing fanbase of supporters by building that affinity, but you have to use the tools and you can't stop. If you want this to be your living you have to make it your living and that means working hard to get those 1000 true fans, because they are out there!
Posted by Unknown at 7:03 PM